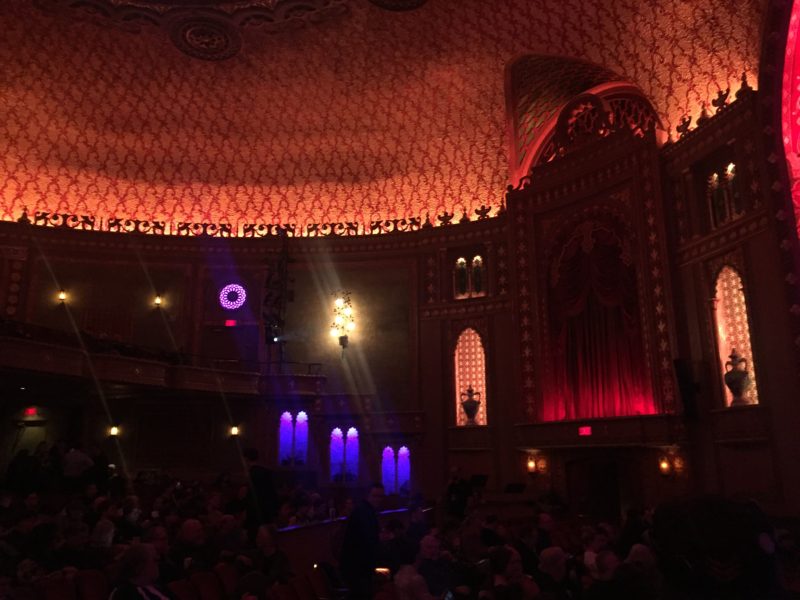 The i2b team of one continues their coverage of the Big Ears Festival in Knoxville, TN. Please share widely. And if you are feeling generous, click that DONATE button over there so we can buy gas and go home.

Day 4 began with some drama for the i2b team. We had hoped to be through with the excitements once we bailed out the photographer, but alas, no. We don’t know how the copy editor actually got to Dollywood, not the exact nature of the alleged unpleasantness that so alarmed the Pigeon Forge constabulary, but on behalf of the entire i2b team, we offer our regrets and apologies. However, any restitution for damages shall be the sole responsibility of the copy editor, who we had conveniently sacked several hours before whatever unpleasantness may or may not have occurred at whatever time – past or future – the alleged acts may or may not have etc and so forth. There will be no further comment on this matter.

We finished our Day 3 summary just in time to scamper to the Mill & Mine for the highly anticipated Tyshawn Sorey Trio performance at noon. Aside from being named a 2017 MacArthur Genius, Sorey has a rich discography as both leader and sideman. Fantastically talented on drums, piano, and trombone, Sorey has also been making his mark as a composer.

But not every event can live up to expectation, even at Big Ears. Beginning with a long, pensive introduction by Cory Smythe – a terrific pianist who we saw several times with the International Contemporary Ensemble – every section of this 75 minute, single composition performance seemed to go too long. Multiple apparent endings would come and go, a comma appearing where a period would have provided much needed respite for the audience. Still, moments of the set were thrilling. Smythe is a remarkably inventive pianist and Sorey’s reputation as a percussionist is well deserved. It was not a bad show, but it certainly was not great. Combine the need for editing with the fact that we were a standing audience in the over-sized (for this show) Mill & Mine: the overall effect was to add to the exhaustion that three full days of music-chasing had created.

This sense of exhaustion hung over the final day of the festival. You could see it in the faces of the listeners, the festival staff, the security guards, the good people vending the beverages and the snacks. But kudos to Knoxville and the event attenders: even with this pervasive fatigue, everyone remained friendly and patient. We are just glad that the all-day rain of Saturday had drifted away.

A quick note on weather: it was not good for the festival until Sunday afternoon, when the sun came out and the winds died down. Aside from forcing a relocation of the epic fiddler jam, the weather had little impact on the festival programming. Venues were full and lines for food and drink around town were formidable. The price we paid for bad weather lies in the diminishment of the street scene. Where last year found the plazas and sidewalk cafes jammed with scores of people speaking a dozen or more languages, this year saw people huddled indoors, always taking the most direct line between venues to limit exposure to the elements. For a town as charming as Knoxville, this was indeed something to lament.

But you can ask Memphis Minnie about the weather: crying won’t help you and praying won’t do you no good. Plus, the Sunday schedule somehow seemed less packed than the first three days, not that it was free of desire conflicts. With a glimpse of the sun, we settled into a seat on the square in front of coffee and pastry, happy to watch the lovers stroll and the children frolic, bemused that the strolling lovers were, many of them, destined to become the parents chasing children in frolic. An older gentleman busked with his violin, playing some Eastern European pieces that spurred our research assistant to drop a few bills in the fiddler’s open case.

Fortified by this interlude, we shook off our lethargy and ambled over to catch the set by guzheng maestro1We really need a non-gendered version of this word. and banjo avatar Abigail Washburn at the Bijou. Now, we’ll be honest: Our expectation for this set was low. It had all the earmarks of a boardroom planned cultural pastiche ready made for a PBS fundraiser program. Our plan was to catch a tune and get back outside for a nap in the sun. 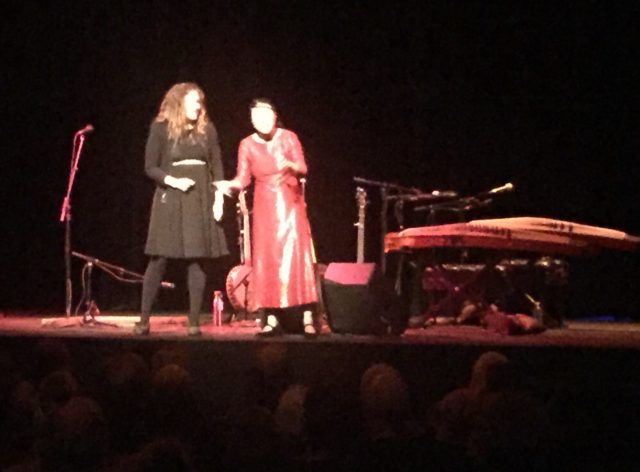 We were wrong. This show was the quirky surprise event of the weekend. Abigail and Fei, it turns out, have been friends for years. The songs in the set were developed on the front porch during afternoons spent watching their children frolic. (They both live in Nashville and have kids around the same age.) What could have been a corny commingling of cultures turned out to be one of the most generous and refreshing things we’ve witnessed in a long time.

Turns out they have been gigging this material in coffee shops and open mic nights around Nashville; this was perhaps their first proper concert; Fei expressed her gratitude at playing someplace where nobody thought they were weird. They began standing back to back, each singing into the soundhole of a guzheng stood on end. The harmonies and resonances matched anything heard all weekend. Okay, then, one more tune. And then one more, and one more, until the hour had passed by.

One piece they examined was a Chinese Communist anthem that was used to spur worker productivity. Turns out it began as an old time farmer’s tune about chickens,. They paired that with the Appalachian traditional “Old Cluck Hen”. They are, it seems, the same dang tune, and the effect of harmonized English and Chinese lyrics is literally tear inducing. Another song about a dutiful daughter from the countryside, sent to the city to earn a living at the mill or factory – only to be turned into an escort for a well-heeled man – took a fine turn when the destination city turned out to be Shanghai.

Throughout, Fei and Abigail demonstrated a solid social conscience. The two pieces described  above convey a solid awareness of the commonality of their rural working class backgrounds, and later, their performance of a piece about the (true) historical figure Mulan was prefaced with a comment about strong women and “douchebags in power”.

Washburn, who at seven months pregnant assured us that her doctor had given her clearance to clog dance her heart out, is a natural born comic and story teller. Fei is her straight person, a dry as toast foil to Abigail’s good humored jokester. Dang, we love these women, and cannot wait to hear the album they promised is coming this fall.

Just a little while later – long enough for another cup of joe in the sunshine – the trio Bangs took to the Bijou stage. Pianist Jason Moran announced that Bangs – with guitarist Mary Halvorson and cornetist Ron Miles – had been together for six years and four gigs. It was beautiful, dreamy music, with a solid balance of composition and improvisation, swinging tunes and outside abstractions. The i2b team has loved all of these musicians over the years, but this was the first time catching this rare combination. They offered a CD for sale that was sold out before we could get to them, but rumor suggests copies are available online. We’ll be listening as soon as we think we can absorb more music.2Big Ears proves that one can ingest a sufficiency, at least, that demands a recovery period.

We were at a critical juncture. We could have called it a weekend, succumbed to the temptations of one or the other of Knoxville’s fine taverns, secure in the knowledge we had done our best to hear as much as humanly possible. But that would have been a lie, so onward to the Tennessee Theater for a transition from Bangs to Banging on a Can.

Local heroes nief norf presented Steve Reich’s 2013 composition “Quartet” for two pianos and two marimbas. We usually expect the interlocking melody lines from Reich. Here, the polyrhythms played out in muscular block chords. Just the thing to boost flagging energies and to prepare us for what came next. During the Reich, we noticed music stands and microphones set up around the audience, so we made sure to get a central seat for the Bang on a Can All Stars 30th Anniversary blowout. 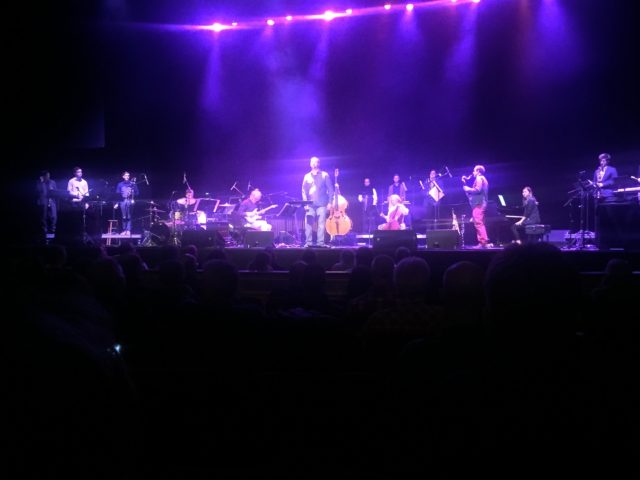 With a little help from nief norf, BoaC began with Michael Gordon’s “Big Space” for thirty musicians: 15 on stage, 9 in the balcony, and 3each in orchestra seating right and left. Gordon is quickly shaping up as one of our favorite composers. Just as with “Rushes” for 7 bassoons – and “Timbers” from last year’s fest, for six 2×4 boards – Gordon aims to fill the space with repetitions that layer to create sound cascades through the performance space, and while this may appear merely “Reichian”, Gordon has developed his own spin on things. The surround sound effect was miraculous, aside from Electric Ascension and Godspeed, nothing we heard approached this level of sonic envelopment. (Granted, we missed Lightning Bolt; reports from that front described volumetric heights that triggered scientific instruments out at Oak Ridge. Or so we heard.)

Paring down to 6 musicians, the All Stars followed up with Julia Wolfe’s “Big, Beautiful, Dark & Scary” and David Lang’s “Cheating, Lying, Stealing”.3Gordon, Lang, and Wolfe are founding members of BoaC. This was as much prog rock as it was classical music, whatever that means anymore. Against the backdrop of these pieces, Philip Glass’s “Closing” sounded damn near romantic, lush and calm and lovely. This respite saved us for the final assault, Steve Martland’s “Horses of Instruction”. Let’s just say that Martland learned his Crimson lessons well. This piece was all energy, a runaway train of shifting time signatures, tricky ostinato figures, and hell for leather tempo. It was a fitting crescendo. 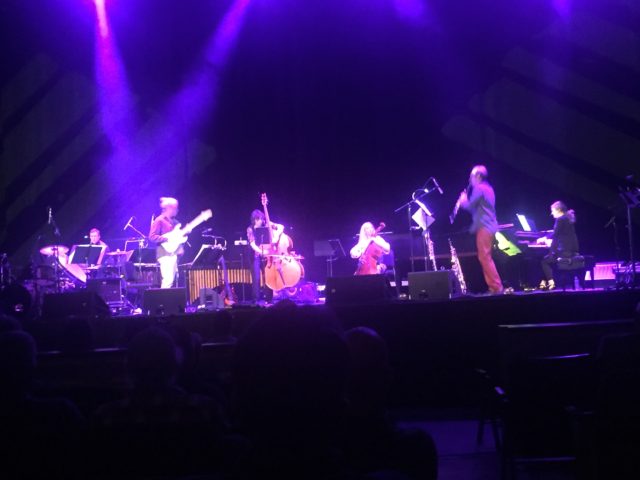 And it was then, when we wandered into the gentle evening air, that we knew we were done. Apologies to Craig Taborn, who turned in what we heard was a fine performance, but we had nothing left. Our ears proved not quite big enough.

But we were well beyond happy, both with the music we heard and the conversations and new friends that bubbled up. We wandered down to Old City, where we saw the entrances to several more Big Ears venues that we had never made it to, and found our way to Pretentious Beer & Glass Company for some post-show replenishment of essential bodily fluids. An amazing place, where everything you see was made by hand: tables, stools, the bar, the beer, and most incredibly, the glasses themselves. One side of the joint is a glass-blowing studio where our pals Duet for Theremin and Lap Steel had performed to accompany some glass making. So very cool. 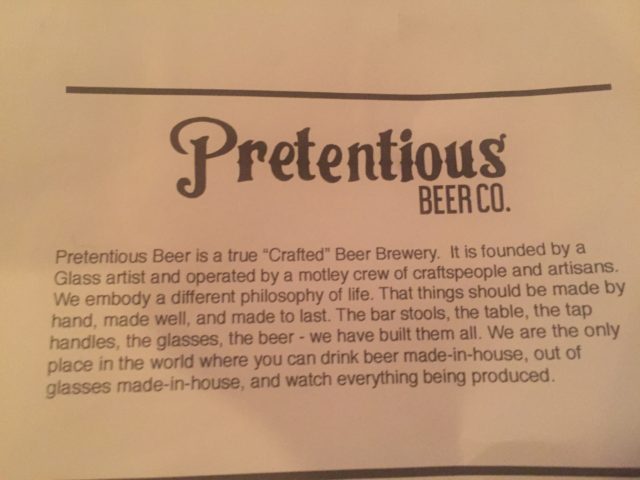 We are sorry to have missed that performance – along with our inability to be eight places at once to catch Anna & Elizabeth, Jon Gibson, Peter Evans a few times, Diamanda Galas, and Anoushka Shankar. Sure, it hurts to miss something you know you would have loved – especially when your friends tell you, “Dude, I can’t believe you missed *that*. It was so awesome.” But on the other hand, there is something comforting in knowing that you literally stuffed yourself to the gills with music most excellent, and still there is a surfeit out there just waiting to fill your ears for the first, or five hundredth, time.

Last year, some smart-ass writing for the Bitter Southerner offered that Big Ears is “arguably the best festival pound-for-pound in the United States.” I ran into that guy, who insisted I take his picture. He wants you to know that he stands by that assessment. 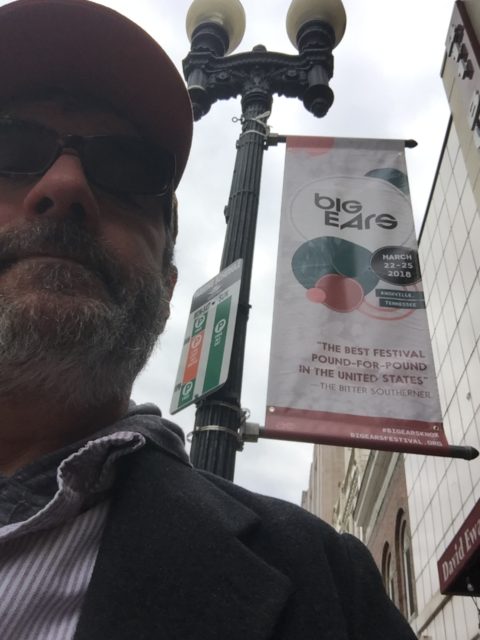