One of the best novels I’ve ever read is almost at an end. This book sits on a list that includes Les Miserables, Infinite Jest, Catch-22, The Sopranos, and The Wire. Yeah, programs from the electric picture radio make the list.1Wanna make something of it? If I were to include short story collections, I’d mention Twilight Zone and Outer Limits, Chekhov, and Raymond Carver.

Last night I watched the 3rd-to-last episode of Mad Men, and out of seven seasons, that image above is one of the most evocative and cool and resonant and hallucinatory and plain badass moments of the entire book. The bare bones of the abandoned SC&P office; the closest thing left we have to play the grand patriarch, albeit thinly represented; and Peg of our Heart casting it all to the wind, drunk and roller skating through the ruins as Roger plays Hi-Lili, Hi Lo on a cheesy organ – the whole sequence felt like that revelatory acid trip moment where you really, really see, man. 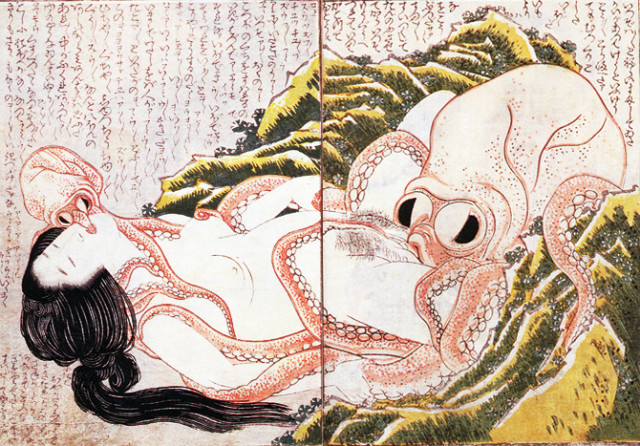 Peg is an ace copy writer, or as we prefer to be known, cunning linguists.

And then, the best piece of Roger-Peggy dialog in the whole damn book:

“You know I need to make men feel at ease,” she says.

“Who the hell told you that?” Roger replies. 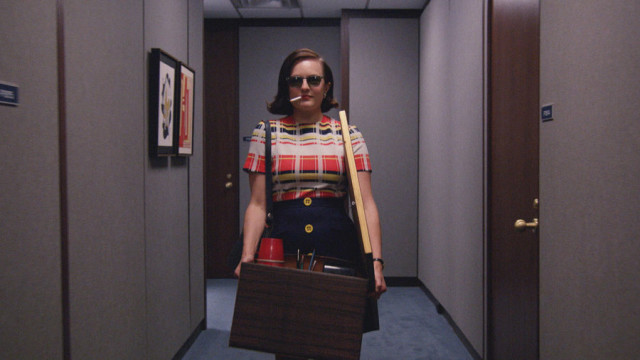 This is a woman who has run out of fucks to give, and who has the internal strength to not have to give them anymore. The sequence plays beautifully, rendered in slow-mo as the white collar drones stumble over their feet trying to get out of her way.

Like the best books of my life, I want Mad Men to slow down as we approach the end. I can’t wait to find out how it ends2Though given their history of landing the biggest blows 2-3 episodes before the season finales, we may already know. For example: Joan told Peg in the first episode years ago to defer to men; she now knows she doesn’t need to. I think it means we’ve seen the last of Peggy. She’s done here., but I also can’t stand the idea that we won’t get to follow the characters beyond the final page.3Not that I want anything to do with sequels, prequels, spin-offs, board games, Mad Men-labeled scotch or filterless cigs, &c.

And yeah, it’s a novel. It’s as textured and considered and layered as any great novel. People have derided it4To my face! as nothing more than a soap opera, as though many of the greatest pieces of literature don’t also fit that description.5Paging Emma Bovary and Countess Olenska.

There are more fully realized characters here than in most great novels, and more than a few secondary characters rendered with greater depth and sympathy than most books/movies/ tv shows can muster for their central players. The detail accorded fashion and cultural context are damned near encyclopedic, on par with Hugo’s description of the Paris sewers or DeLillo’s shot heard round the world baseball game chapter in Underworld.

One thing Mad Men delivered that’s really striking is the sense that, even when characters are not on-screen for weeks (or years!) at a time, when they re-appear we get the sense that they have actually been living the whole time they were away. This is an impressive achievement, and one that not many of our favorite novels can deliver.6e.g., even the implacable Javert seems to have been sitting on a shelf whenever we are not with him on the page.

And maybe even more pertinent to Your Narrator: I know these people. I lived in the NY suburbs during this period. My Dad was a marketing exec, right at the edge of the Madison Avenue gaggle. I recognize the bosses, the underlings, the sycophants. I know the secretaries whose job description included remembering the boss’s kids’ birthdays; to recognize their voice on the phone; to ‘take care’ of us when we visited the skyscrapers at inconvenient moments. I wore the pajamas that kid wore, and I had some of the same toys, and the houses looked that way, and the moms and dads acted that way. The clothes and cars and hairstyles and music all changed the way we see it unfold in this book.

And then one day, they sit you down and tell you that mommy and daddy aren’t going to live together anymore, but don’t worry because nothing really is going to change and they both still love you very much and the earth opens up because you know it’s sugar-coated bullshit even if you’re too young to even know that word. 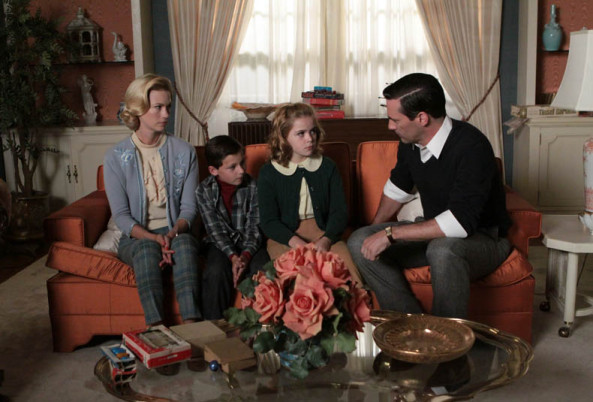 That’s me, second from the left. I swear I had that same shirt.

Sally: “That’s GOING, you say things and you don’t mean them, you can’t just do that!

I can attest to the veracity of the dialogue, the setting, the emotion, the whole package. No cluster of words on a page has ever devastated me more than watching this scene of this “soap opera” on the idiot box. I don’t remember any printed words causing me to explode into broken-hearted sobbing like this one.7The death of Gavroche Thénardier on the barricades caused me to burst into tears. But no heart-tearing sobs. (For that matter, I rarely laugh out loud while reading, but often do so while watching tv or movies.8That Your Narrator may be an unwashed Philistine is a question disposed of quickly. He most certainly washes.)

So does the electric picture radio matter? Since I casually name-dropped Emma earlier, let’s hear from her on the delights of reading:

“You forget everything. The hours slip by. You travel in your chair through centuries you seem to see before you, your thoughts are caught up in the story, dallying with the details or following the course of the plot, you enter into characters, so that it seems as if it were your own heart beating beneath their costumes.”

Television at its best delivers the same experience. Sure, it serves up some weak sauce, but we don’t let Bulwer-Lytton or 50 Shades of Grisham keep us from the pleasures of [insert your favorites here]. The long-form format – especially on cable – enables stories that can contain Tony Soprano and Omar and Al Swearingen and Frank Pembleton, with characters and storylines that put to rest any argument that television cannot be as profound and literary as books.

It’s a fair bet that I’ll write more about Mad Men as time goes by. I’m going to take a break for a while and then re-read it, just like my other favorite novels.

i2b is a labor of love. Show a little love by dropping a little coin on Your Narrator.

Have you missed anything?

Whaddya have to say?

The History of i2b